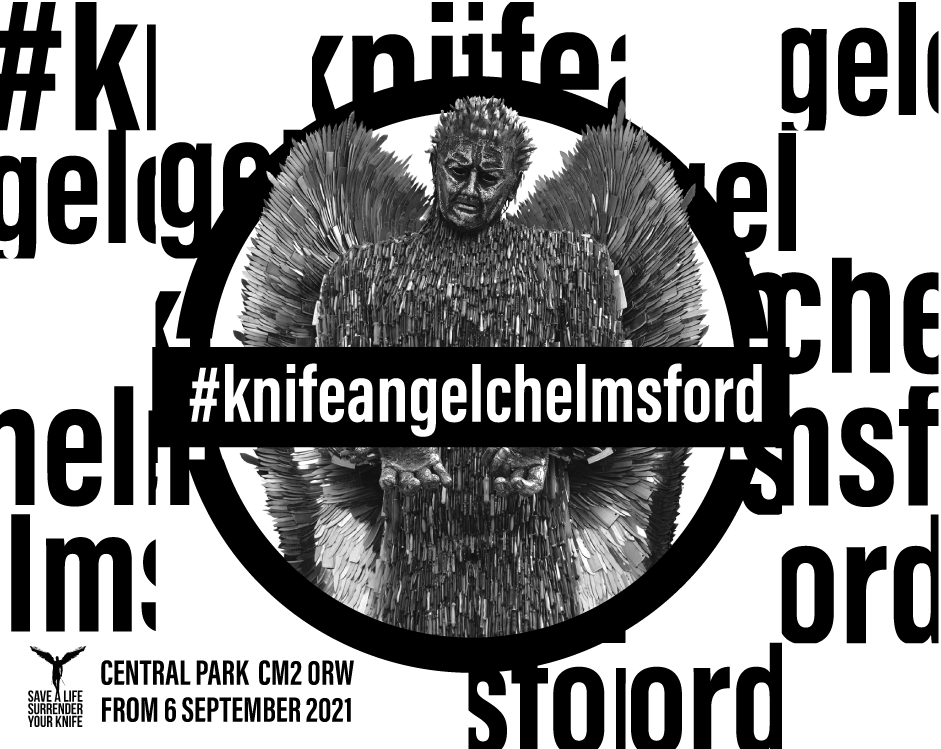 Chelmsford is launching an innovative programme of events to support the arrival of a huge anti-violence sculpture in the city this September. The 27ft National Monument Against Violence and Aggression, known as the Knife Angel, is made from 100,000 blunted blades and it travels around the country warning communities of the terrible consequences of knife crime and aggression.

The sculpture arrives in Central Park on 6 September and education, outreach and workshops to spread its anti-violence message are already underway.

The visit to the city has been organised by youth organisation Keep It 100 Essex with the support of a wide range of partners, including Chelmsford City Council and the Violence and Vulnerability Unit, a national team of community safety experts.

The sculpture represents intolerance to all forms of violent behaviour and is the only monument to travel the whole of the UK with a commitment to bring about social change. Locations hosting the Knife Angel must agree to 28 days of intensive youth anti-violence education.

The focus of its stay in Chelmsford is a celebration of positive youth culture, empowering young people to reject violence long before they might consider picking up a knife. School pupils and young people across Essex will be encouraged to become anti-violence ambassadors, with a pledge not to use aggression to solve disputes.

Events to run throughout September

The sculpture, created by the British Ironwork Centre and artist Alfie Bradley, will be the focus of activity for a month-long series of events throughout September, including workshops for schools and youth groups, and a vigil for the victims of knife crime.

A special youth awards has also been made possible by the angel’s visit. The first KI100 Awards this September will recognise young creative talent across the county, with a range of categories from best entrepreneur and tech skills, to awards for artists and lyricists. The event will be held in the Civic Theatre just before the Knife Angel leaves the city.

R4J, Chelmsford City Theatres’ modern take on Romeo and Juliet, will be running in September, with outdoor performances planned in front of the Knife Angel. The theatres will also deliver sessions for schools, along with KI100 Essex founder Luisa Di Marco, exploring the theme of conflict resolution through violence and its terrible impact.

A key part of the Knife Angel’s national campaign is the message ‘Save a Life, Surrender Your Knife’ and throughout September there’ll be a knife amnesty in the city. New, discreet knife bins will be placed around Chelmsford so that anyone with a weapon may dispose of them safely and without fear of prosecution. Details of where to find these permanent knife banks will be available on the Keep it 100 website in the lead-up to the Knife Angel’s arrival in Central Park.

R4J performances and workshops throughout September

In addition to activities and events planned for September, an extensive programme of outreach developed by Knife Angel partners is already underway across Essex. Around 16,000 Year 6 pupils are receiving free virtual immersive theatre sessions from Crucial Crew, exploring the themes of grooming, county lines and knife crime.

Year 7 and 8 pupils will also have an opportunity to take part in an innovative project about knife crime and exploitation. Anglia Ruskin University’s StoryLab research institute has been working with students from two Chelmsford secondary schools to develop an immersive project using VR headsets which is planned for the start of the new school year.

KI100 Essex founder Luisa Di Marco says the city’s focus on youth violence for the Knife Angel’s visit is a chance to make a difference.

“The Knife Angel’s first visit to our county is an opportunity to educate young people onalternatives to violence and criminality and a time for adults to be educated on the reality of what our young people are being subjected to.

For many, youth violence will become a normal part of life, but young people are not born violent. Tackling youth violence in all its many forms and providing inspiration to take a different path is what Keep it 100 Essex is all about. Our young people deserve so much more, with earlier interventions and support to prevent future lives being lost.

I hope the Knife Angel programme will empower our communities in Chelmsford and Essex to help our children and young people, giving us all a much greater understanding of the signs of exploitation and how to stop it.”

The full line-up of activities and events can be found on the KI100 Essex website, along with details about how to sign up as an anti-violence ambassador and take part in workshops and the KI100 Awards.

There’ll be more information about the Knife Angel programme in the coming weeks and if you’d like to hear the latest, sign up for updates on the Chelmsford City Council Festivals and Events mailing list and keep an eye on the Keep it 100 website.