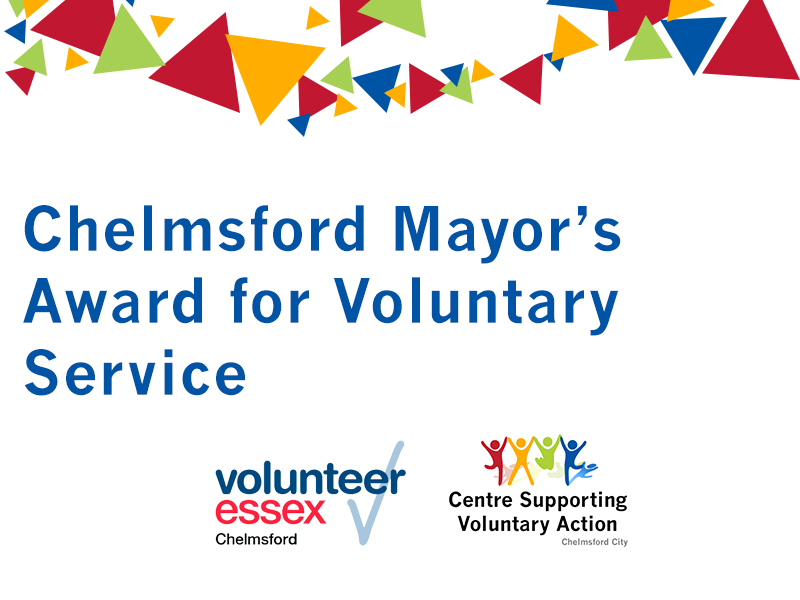 Local volunteers received a surprise to their doorsteps during the lockdown as Awards, Certificates and Commendations for Outstanding Contribution to volunteering in 2019/20 were delivered to local people by staff at the Centre Supporting Voluntary Action on behalf of the Mayor of Chelmsford.

Chelmsford Awards for Voluntary Service were formed seven years ago by the Centre and are supported by the Mayor to recognise outstanding contribution in volunteering. Lorraine Jarvis from the Centre said: “Chelmsford is a place where people care about each other and are willing to give of that most precious commodity, time! These Awards shine a spotlight on some of the fantastic contribution volunteers make across the community and celebrate volunteering prior to lockdown.”

The Winner of the Mayor’s Award for Outstanding Voluntary Service 2019 in the Adult Category is Paul Wilson.  Despite having a serious health condition that means he is unable to walk far without getting out of breath, Paul volunteers for several organisations – CHARMS The Essex Therapy Centre, Chelmsford Centre for the Blind, Farleigh Hospice, Air Ambulance, Chelmsford Men’s Shed, and organises quiz nights for a number of others as well. At CHARMS he volunteers as an operator of the Hyperbolic Oxygen Unit, making teas, and generally keeping up the morale of members.

Dr Ben Newman Wright, Director at CHARMS, who made the nomination, said: “Paul is definitely a “people person” – a ready smile and a quick wit to greet our members keeps their morale high. He is always cheerful and works not only for us but for a number of other groups as well – he is a real confidence booster to those who are lonely, disabled, and often very ill. For us we can think of no one who deserves an award more.”

Winner in the Young Volunteer Category is James King in appreciation and recognition of his outstanding contribution as a volunteer with The Wilderness Foundation’s Down to Earth Allotment Project. Despite facing significant personal challenges, James helps with a range of things including weeding, planting, laying woodchips, watering, seeing to the flowers, fruit and vegetables.

His nominator, from Columbus College where he attends school, said: “James has become more confident since volunteering at the allotments; more willing to try helping with new tasks and working with unfamiliar adults. James is always enthusiastic and dedicated to the work he does.”

Highly Commended certificates, in appreciation and recognition of exceptional contribution made to volunteering, were awarded to: