Nick Alston, Police and Crime Commissioner for Essex wrote an article in December about modern slavery and concerns that, as with other forms of ‘hidden harm’, it is happening in Essex. The article (http://www.essex.pcc.police.uk/2013/12/its-happening-here-modern-slavery-in-essex/) followed the announcement of the government’s Modern Slavery Bill and spoke of his intent to explore the impact and scale of human trafficking in Essex.

Human Trafficking – The National Crime Agency issued the figures for the United Kingdom for 2013, giving high-level data about the victims that were identified and referred last year. They showed that referrals increased by 47% compared with 2012, with children making up a quarter of all referrals. Sexual exploitation and forced labour were the most prevalent types of trafficking and whilst Eastern European countries, Nigeria and Vietnam remained the most frequent countries of origin for victims, UK citizens featured as the 5th most trafficked nationality.

“I implore everyone to take even just a little time to learn a bit more about modern slavery and crucially to report any concerns to the police or their local authority. The more eyes and ears we have, the more people we can save”. Nick Alston, Police and Crime Commissioner for Essex. 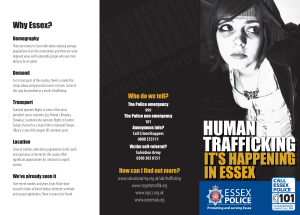